Southern style home blogger Lauren Shaver of Bless’er House blog isn’t a stranger to do-it-yourself renovations. The first house she and her husband shared, a new build, was taken from basic builder-grade to farm-style dream home. A few years later, the family decided it was time to move, and the hunt began. “Our biggest must-haves were a big backyard, an established neighborhood with big trees, and a house that had plenty of character but still needed a doable amount of work for intermediate DIY-ers like us,” she recalls.

Fast-forward a few months, and the family of three was in their new home, but not the one they’d planned. “The original house we had our hopes on had four acres of land and had a much more rural feel,” Lauren recalls. But the plan fell through, and soon after, they purchased a traditional brick Colonial home in the suburbs of Charlotte, North Carolina. Lauren admits being heartbroken at first about the loss of that country home, but she is thankful for the change of plans. “In only a year, the area where that house is has now grown exponentially, and it doesn’t have nearly the amount of rustic country charm it used to. You can add all kinds of beauty to a house, but you can’t really change its location.”

The couple barely had time to settle in, though, before they started their long list of renovations. Coming up on their first year of being in this home, they’re working on what they’ve dubbed “phase one” of renovations. “The main goal this past year has been to do as many simple cosmetic fixes as we can to make it reflect our style.” This has meant adding farmhouse touches to every square inch of their Colonial, starting with the exterior. In a massive undertaking, Lauren and her husband limewashed their home’s red brick exterior with the help of professionals.

From there, it was all on them. They haven’t changed the layout of their home or the floors yet, but they have painted nearly every room and door. Their foyer is a light gray with a Louis-Philippe-style mirror, both of which reflect light gorgeously through the space. Right off the foyer is their dining room, drenched in light from two large windows. Lauren opted for a moodier gray with white wainscoting. To open up the space, she installed a gallery wall of gold mirrors on the wall opposite a window. She also used majority white-slipcovered furniture, with a white and natural wood dining table, for which she and her husband built a retrofitted oak table top.

Lauren’s favorite room, though, is the living room, which was also the first project she and her husband took on. “We spend the majority of our time as a family in that space, so it made sense to make it the first spot that really felt like home and reflected our own style before the rest of the house,” she says. “It was our escape from the chaos when the rest of the rooms were in mid-project mode.” Originally painted a bright yellow, the room now has a light and airy atmosphere thanks to a fresh coat of off-white paint and, once again, an abundance of windows. The couple also limewashed the red brick fireplace to match the home’s exterior and custom-built a window seat adjacent to a set of French doors that lead to the back porch.

Though the couple has two dogs and one daughter, with another child on the way, they aren’t afraid to use lighter fabrics, which is evident in their décor. “We’re big fans of slipcovers. If it’s washable, it’s my friend,” Lauren jokes. “We love vintage-style rugs, too, because they hide stains so well. We use weathered tables because if we bang them up, it just adds to the character.” In fact, Lauren paints and distresses much of her furniture herself, with a good deal of it being DIY projects that she picked up from thrift stores, including her gorgeous tufted coffee table. 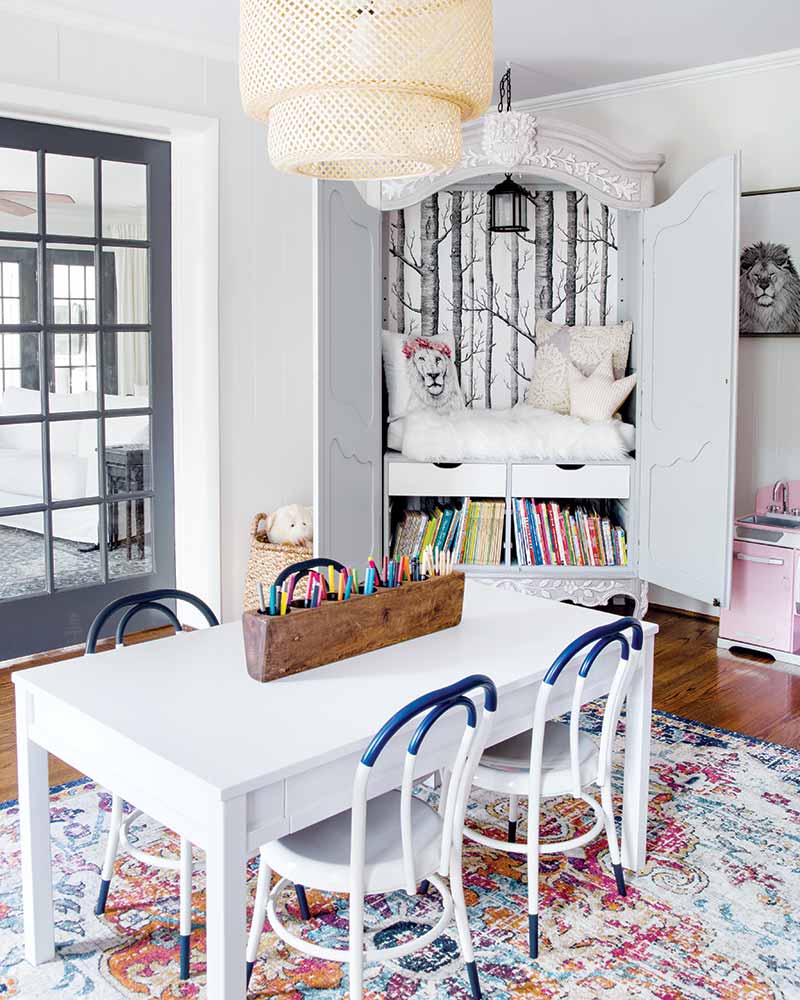 Out of all her Colonial cottage’s many rooms, though, her daughter Olivia’s playroom might just be the most unique. Complete with a limewashed fireplace, colorful Oriental rug, and Narnia-inspired armoire, it’s everything a little girl could dream of. The room houses a play table where she can color and a set of French doors leading to the living room that can be closed off.

Lauren’s Southern heritage shines on her back porch. With ceilings painted haint blue, hardwood floors, and natural wood furniture, it’s an updated take on the classic Southern porch. “Summertime always says ‘Southern’ to me, so it’s the hot months that remind me the most of my childhood when my brother and I would catch frogs and fireflies in a jar from the yard,” she says. “I remember waking up many mornings in the summer to the sound of my parents’ creaking porch swing, where my mom would drink her coffee while reading a book. Sitting on the back porch takes me back to those moments all over again.”

6 Canadian Designers You Should Be Following This Canada Day

6 Canadian Designers You Should Be Following This Canada Day

This Maryland Porch Receives a Modern Makeover with a Vintage Twist