Over the course of her long and prolific career, Dallas interior designer Pam Kelley has worked in every style, but for her own home the choice is simple. “I am a traditionalist at heart and a Southerner,” she says. “My signature style, for me personally, is the classic American house.”

Hallmarks of English country homes—18th-century chests, a bamboo coffee table, arm chairs with deeply fringed skirts, and an ornately carved oak chandelier—tap into the historic roots of traditional American style. The soft gray-green Brunschwig & Fils upholstery on the Baker sofas brings the green of the garden indoors. The original mantel was missing so Pam installed an antique English marble surround to frame the fireplace. 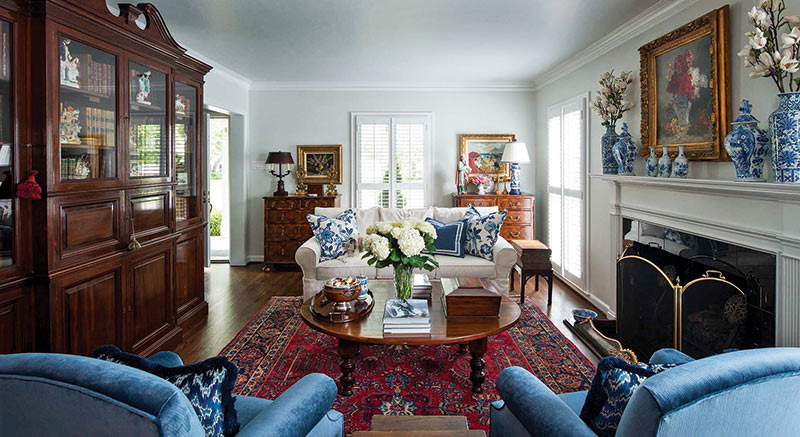 About five years ago she decided it was time to downsize. “My furniture and art dictated the house I could and would buy,” she says. It had to be stylistically sympathetic to her 18th-century antiques, which include a massive early 18th-century English bibliothèque and seven 18th-century English burled-wood chests. The 1931 neoclassical cottage she found in Highland Park was perfect, a miniature version of her old house.

Designed by Dallas architect James Duff, it featured 8½-foot ceilings, hardwood floors, two working fireplaces, and the roofline balustrade typical of Duff’s houses. It also had lots of little closets and small, chopped-up rooms, so Pam took the interior back to the studs to capture every inch of useable space.

In the informal family room, she replaced the original three sets of French doors with energy efficient double-pane thermal glass doors with larger panes. “That opened the room more to the garden,” she says. The center pair of doors folds back flat, so in good weather the family room can be opened to the patio, creating one large entertaining space indoors and out.

Furnished with English antiques, a Sarouk rug, and blue-and-white porcelain, the formal living room exemplifies traditional style. The massive early 18th-century English bibliothèque was “the first important piece of furniture I ever purchased,” says Pam. The coffee table was originally an American-made dining table that Pam cut down.

Our Southern Cottage Special Issue Is Filled with Stylish Charm!

Refresh Your Home Décor This Winter with These Stylish Finds!