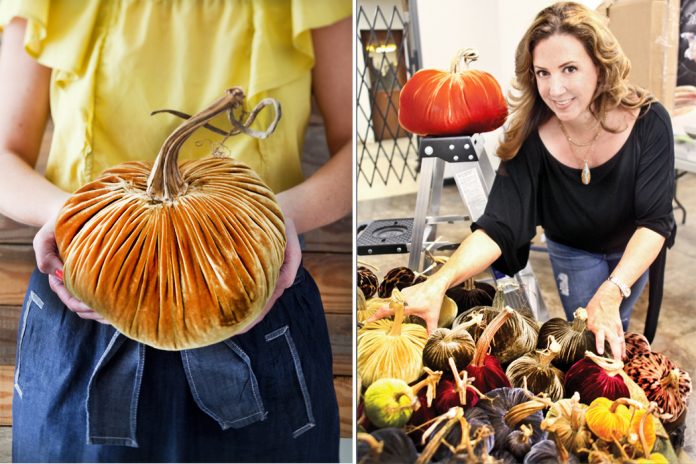 A homegrown specialty has shaped an artist’s passion for décor into a career.

Originating out of her desire for more than what home décor shops were offering during the holidays, Monya Kampa began creating small velvet pumpkins to use around her home. After dozens of requests for customized designs and encouragement from her husband and friends, Monya decided to try selling her harvests of velvet. In her hometown of St. Paul, Minnesota, she sold three thousand in her first year alone. “I was inspired to take Plush Pumpkin to the next level,” Monya explains, and her homemade hobby has now become her booming business.

Monya credits all of her creative abilities to her mother, Pat Pehlivanian, who taught her how to knit and sew. Though her mother passed away nine years ago, Monya honors her artistic legacy by embossing her mother’s initials on the bottom of each individual pumpkin. The pumpkins are hand sewn and filled with rice, wrapped in velvet, and topped with natural pumpkin stems. Monya and her team of just nine full-time staff members work year-round to produce each Plush Pumpkin that you see in stores, in addition to many charitable donations and a line of special pink pumpkins for Breast Cancer Awareness. “I always want to keep that balance of sales and donations.”

As Plush Pumpkin has grown, Monya has founded many partnerships with people eager to share the Plush Pumpkin story. Most recently, Rodgers + Hammerstein’s Cinderella on Broadway contracted Monya to sell her orange pumpkins as souvenirs for the Tony Award- winning musical. Facing the daunting task of creating an estimated 100,000 pumpkins for this season, Monya maintains a positive spirit. As homes across the country become festooned with her velvet gourds, Monya is preparing the unveiling of a new line of velvet acorns and mushrooms. She states, “There are no limits. I just enjoy seeing what new things I can accomplish.”

Designer Molly Kidd Creates a Simplified Space Made for Relaxation

From French Flair to Palm Beach Pretty, Our Comprehensive Style Guide Covers It All