A garage with a carriage house above was supposed to be a temporary home for Patsy and Jeffrey Schmidt of Christiana, Tennessee. They would live there with their daughters, Emme Grace and Rayley Beth, while the main house was under construction. But when their third daughter, Maggie, was born with Down syndrome, everything changed.

“I had a gift shop and did interior design for almost 11 years,” says Patsy, “and after I saw all the time the therapies were going to take, I closed it six months after she was born.” Without Patsy’s income, the couple couldn’t afford to build the house they had planned. Then inspiration struck: If they converted the garage to living space and flanked it with wings, they would have a classic symmetrical design that looked intentional and provided the space they needed.

After hiring a builder to lay the foundation and frame up the additions, the couple spent the next seven years on construction. Except for the exterior brick and staining the solid oak floors, the couple did everything themselves—inside and out—including wiring, plumbing, and building custom interior doors. “When we were doing the Hardie board [on the exterior], this was before Fixer Upper and YouTube,” Patsy says. “We had to teach ourselves. My husband is the most patient man I’ve ever met.”

To finish the interior walls in the main living areas, Patsy wanted exposed brick and shiplap siding. “I have wanted interior brick since the first time I saw Steel Magnolias,” Patsy says, referring to the 1989 Herbert Ross film with an all-star cast including Sally Fields as M’Lynn Eatenton. “M’Lynn’s kitchen felt like home, so cozy.” Brick facing, however, was beyond their budget, so they bought three pallets of brick and spent countless nights and weekends trimming the faces off (Jeffrey’s job) and applying the slices to the walls (Patsy’s job).

Choosing shiplap siding before it became popular, the couple made their own. “It’s some serious shiplap,” she says, “but the thing I like about it is there are hardly any seams. I love the warmth it adds to the space.”

To keep the 12-foot ceilings in the former garage, they left the ductwork exposed. The industrial look works well with the distressed brick and salvaged wood, and the high ceilings make the space feel larger. Even with all the space needed for the heating and air conditioning system, there was still room in the corner for a snug pantry with open shelves. “The entire downstairs is only 1,900 square feet,” Patsy points out, “so I tried to use all the tricks to make it seem bigger—lots of windows and tall ceilings.” That’s why she gladly sacrificed cabinet storage in the kitchen in favor of three tall windows united by an eyebrow transom.

Both the materials and the furnishings reflect Patsy’s aesthetic of mixing old with new. “I love the look of things being collected over time,” she says. “I like things that have stories, a background.” The heavy structural beams supporting the kitchen-den ceiling, for example, are encased in poplar boards salvaged from a 100-year-old barn they restored. Her husband’s grandfather had worked in the barn when he was a boy, throwing hay bales from the loft. “I love knowing as I’m doing dishes that his granddaddy walked on those boards,” Patsy says.

On the wall opposite the brick arches in the den, Jeffrey cut a wide doorway leading to the new master suite, a half bath, and an office. Up the 19 stairs to the carriage house, the two bedrooms and bath were left intact for the three girls to share. The old kitchen became a space for art activities and for Patsy to homeschool Maggie.

The labor-intensive, time-consuming, often exhausting process of building their own home almost from scratch was intertwined with the challenges and joys of raising a child with Down syndrome. “It wasn’t part of our plan,” Patsy says. Maggie’s birth forced them to change course, but “it ended up being the biggest blessing. She has taught me to slow down and take nothing for granted. Everything we do has taught us a lot about patience and gratitude.”

Want to see the rest of this inspiring do-it-yourself home? Get your copy of our special issue, Southern Cottages. Click below to shop! 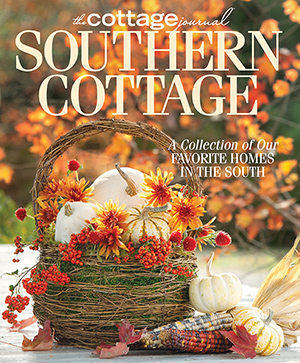 Take a Look at Our Southern Cottage Special Issue

6 Steps to a Perfectly Organized Home

Bring in the Bold with These 2020 Design Trends