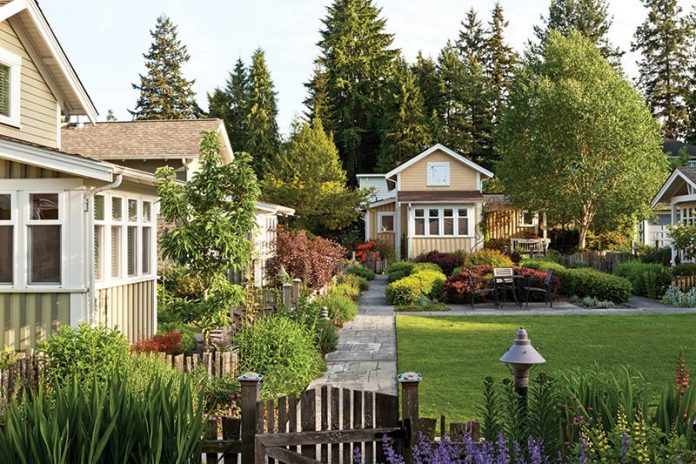 Cozy front porches, friendly neighbors, and a true sense of community are just some of the attributes enjoyed by these homeowners in their inviting cottage neighborhood.

It’s no mystery that as our lives evolve, our needs change as well. With that said, sometimes an opportunity may roll around that, only a few years ago, would have seemed impractical. And when good fortune comes along in the form of a wonderfully planned community, such a discovery may be hard to pass up.

Washington homeowners Brian and Colleen Ducey not only have found the right place, but they’ve also adjusted their daily routines accordingly. It took some settling in for them—and lots of decluttering—to make their new location an ideal choice. “Before moving here, Brian and I were living in a 2,400-square-foot home in Seattle,” Colleen explains, “and although we had talked about downsizing many times, our options seemed limited.” Because their children are grown and out on their own, the couple felt like they were spending all their time maintaining the house and yard. Also, since they weren’t exactly thrilled to relocate into an apartment, townhouse, or condominium unit, the Duceys were willing to try something new.

As fate would have it, one Sunday they saw an ad in the local newspaper about a cottage community in nearby Shoreline, Washington. Known as the Greenwood Avenue Cottages, the development was hosting an open house with cottages for sale. As they toured the site, the Duceys met the designer of the community and asked which cottage he would buy if he was in their shoes. “He pointed out a tranquil, peach-colored [cottage] that was roughly 980 square feet—less than half the size of our present house!” Colleen says. After looking the place over, the couple was smitten. Five weeks later, they were bona fide cottage dwellers.

Known as a pocket neighborhood, the Greenwood Avenue Cottages consist of eight small houses that cluster around a commons area. Each dwelling has its own private yard that’s surrounded by a low fence and garden gate. Working closely with Seattle-based The Cottage Company, which both developed and built the project, the architect was eager to demonstrate that smaller houses can feel and function much like larger ones when there’s plenty of light and storage space. “And apart from any particular architectural style, I put as much emphasis on the dwellings’ size and massing as I did their appearance,” he adds.

Along with prioritizing their possessions, the Duceys also had to become accustomed with living so close to their neighbors. “Even though we realize that a community like Greenwood may not be for everyone, to us it’s been a very freeing experience,” Colleen admits. “The longer we live here, the simpler our lives become.”