Paige Minear and bold decorating go hand in hand—this much is obvious from the first steps into her home. Raised in central Florida, Paige has loved pattern and color all her life. Pointing to a photo of herself as a child wearing a patterned dress in her grandmother’s pink dining room, she says with a laugh, “That is my personality in a picture.”

Her husband is a South Florida native, so he is just as infatuated with bright hues and bold décor as she is. Their Florida roots are a primary influence in their home’s design scheme, though you wouldn’t know from the exterior. A stately Georgian-style red brick home situated in a charming suburb of Atlanta, Georgia, the home appears unassuming of its colorful Palm Beach style from the street. But inside, Paige has made her mark with preppy décor and vibrant color, starting with the foyer.

Upon first glance, the walls of the foyer may seem to be covered in a brightly colored wallpaper, but take a closer look, and you’ll see that the pattern doesn’t repeat—it’s actually painted. The hand-painted design represents the couple’s life together, with 11 different memories included, such as their honeymoon in Savannah, Georgia, and the homes of both of their grandmothers. “My husband’s grandmother’s home has since been torn down, so this is kind of like our last piece of that special place,” Paige says.

The living room has white walls, but the décor and furnishings within consist of a menagerie of hues, including a soft pink ceiling. With so many different colors and patterns at play, it would be easy to think that the home would look disjointed, but it doesn’t. The style is bold, but it blends cohesively, which Paige attributes to two things. First, she uses a common color thread in every room: either green or blue. Second, Paige uses only what she loves. “If I like it, I include it,” she says. “I don’t really think about what’s going to match or what other people like. If I like it, it goes.”

In the kitchen, Paige opted for a bright yellow with pink and blue accents. Paige notes the laundry room—located just off the kitchen—was the toughest to decorate because she knew she would later want to wallpaper her kitchen, so the laundry room needed to match. “I didn’t change the kitchen until about a year later, but I’d had the wallpaper picked out for a while,” she recalls. 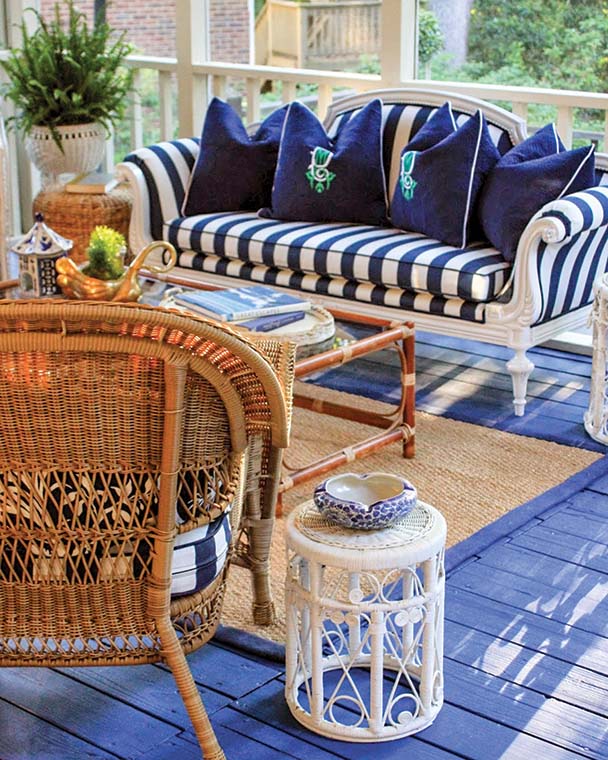 As a matter of fact, the Minear home as a whole has been a project in patience and connection. The family has taken years to slowly redecorate their home, but the waiting has paid off, as the home now ties together perfectly with a very colorful connection.