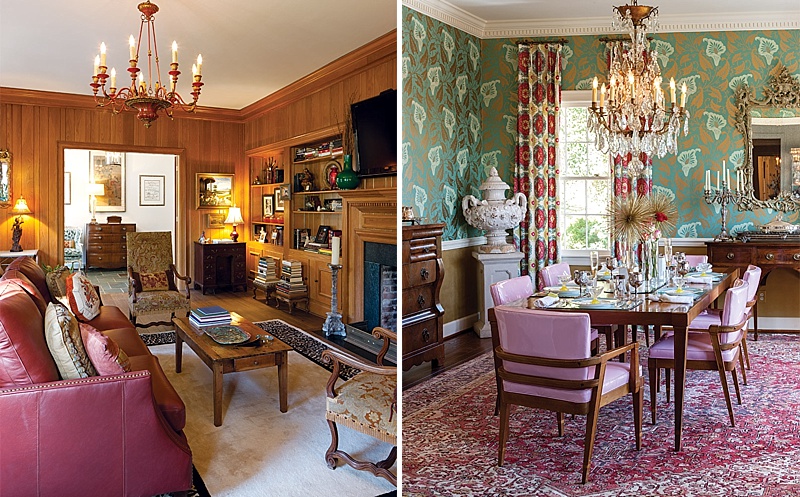 After four years in the home, the Kidds have created a place for family and entertaining that reflects both their past and present. Growing up, Robin spent nine years living near Santa Barbara, California, which she admits definitely influenced her decorating style. The living room’s Hollywood Regency style is anchored around the curved sofa. “That [sofa] was the start,” Robin says. “I already had it, and I thought the shape of it would be great for this living room.” Combined with a collection of antique furnishings from family, an Art Deco mirrored chest, and an assortment of both modern and Old-World paintings, Robin’s eclectic tastes bring a hint of California cottage style to their Southern abode.

Between the living and dining room is a brick-floor breezeway of a room that the original owners had used as a sunroom. “I thought it was an awkward transition,” Robin says. “I really had to think about why is this room here between your kitchen, entrance hall, and living spaces,” she says. By converting the sunroom into what the Kidds call the “bar room,” it becomes a very practical and highly used space for both living and entertaining. With windows and French doors that open to the terrace, Robin decided to “make it sort of a ‘clubby’ room, which makes for a very natural transition to walk through to the other spaces where you’re going to sit.”