Nobody really knows how the tradition began. But it is likely the first forced branches came after a brutal midwinter storm ages ago. Some poor gardener’s forsythia probably shed it’s branches and, rather than leaving the fallen glory outside, the twigs were rescued, brought indoors, and magic transpired. That accidental discovery fueled the ritual forevermore. In many areas across the country winter holds at least one blizzard with howling histrionics and squall-force winds that brings down branches galore. After shoveling out, you might as well take the opportunity to salvage snapped twigs into winter blahs-busting bouquets. Somehow, having a few branches close by when it’s still blustery outdoors can make the difference between cabin fever and a spring in your step.

Although pussy willows and forsythia are traditional forced branches, they are just the beginning. Redbud, magnolia, flowering cherries, apple blossoms, witch hazel, dogwood, Korean spice viburnum, and ornamental quince also work as well. If any spring-flowering tree is toppled in a storm, you might as well give it a try—there’s nothing to lose and a head start on spring to gain. Try to rescue the twigs as quickly as possible if they’ve broken in a storm. Or, if the weather is more forgiving than usual and no storms ensue, prune off short whips from a flowering shrub or tree. Cut the stems on an angle, put them in a vase of tepid water in a spot out of direct sunlight, and wait. While biding your time, change the water weekly to keep it fresh and re-cut the branch stems periodically to ease water intake. When you begin to see buds, stage the vase close to a window for best flower color. Or, if you don’t mind a paler shade of spring, any place in your home will suffice. When the buds start to swell, display them where you need a shot of promise.

Forced branches might not all open in perfect unison, but the tease of a prolonged, slow drama is part of the thrill. Keep the branches in a location that isn’t too toasty, and the performance might linger for many weeks. Meanwhile, spring draws near outdoors, but suddenly, there’s no rush. The personal triumph of your little do-it yourself prelude should get you through that tricky segue between the throes of winter and the hope of spring. You’re branching out—in the comfort of your home.

Order our Winter 2017 Issue for more tips and style ideas! 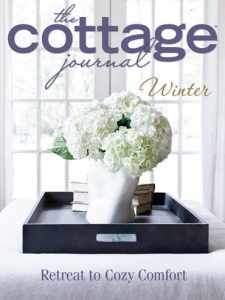