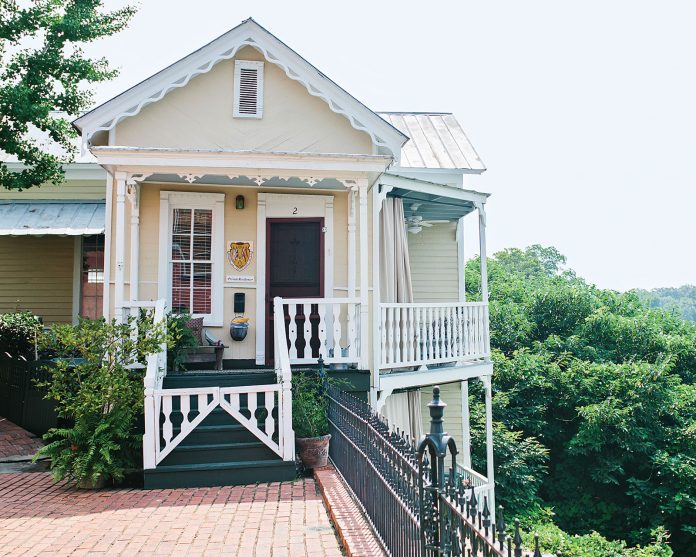 Perched high above the banks of the Alabama River, the Bridgetender’s House has occupied a front row seat to history.

Built in 1884, the modest yellow cottage laced with white trim was originally intended as a home and workspace in Selma, Alabama, for a bridgetender, who would open and close a section of the old swing bridge to allow large riverboats to pass through. The turning operation required the tender to manually turn the capstan to open the bridge—a job that needed attention every hour of every day. The house was a part of his compensation. In 1940, the swing bridge was replaced with the more elevated and now iconic Edmund Pettus Bridge. And while the old bridge was destroyed, its cornerstone remains and can still be seen from the cottage’s porches.

Listed on the National Register of Historic Places, the cottage has witnessed more than a century of history—both inside and out—including the 1965 Selma-to-Montgomery Voting Rights March. Drs. Anne and Allan Strand initially experienced the riverside cottage as a bed-and-breakfast where they would stay when visiting family in Selma. At the urging of their children and grandchildren, they ultimately decided to move to the historic Southern city and purchase the riverside cottage in 2013. “The location was extraordinary,” Anne says, noting that as they began the process of renovation and remodeling it became “a dream home for our family at this time in our lives.”

Southern Style: Anne’s grandmother, Emmy Ellis of Wynne, Arkansas, made the beautiful silk quilt above the couch. “She made one of these for each of her grandchildren,” Anne shares, which makes for both an eye-catching and sentimental piece of artwork.

Anne describes the cottage as “Farmhouse Victorian,” with its large boxy rooms, high ceilings, and original wood floors along with the simple gingerbread fretwork exterior that beckons you inside. With a long list of renovations from uncovering and restoring the heart pine kitchen flooring to creating the cottage’s first closets, the Strands outfitted the house in a way that not only preserved its history but also reflected their personal style.

The cottage is filled with collections of original artwork, heirloom quilts, and comfortable furnishings, as well as small libraries and bridge memorabilia for a whimsical blend of décor that masterfully showcases Anne’s artistic country style. “Exploring antique and junk shops and blending my finds with what I own already in an unexpected or artistic way is probably the basis of my style,” Anne says. “For me decorating is exploring the mix of what I find, what I have, or what I look for. It is like an artist relating to a canvas—moving things around until I like the composition.”

Anne attached stovepipe wire to old-fashioned wooden letters and strung them from the chandelier above the kitchen table for an artistic look that fi ts the space. The colorful kitchen table holds a unique story and is a great example of repurposing pieces you treasure. “Allan had a beautiful marble drugstore table when we married,” Anne says, explaining that it was lovingly used as their dining room table for years. “The marble eventually broke, and we used the base to have a tabletop made the size we needed in the kitchen. I painted, distressed, and waxed it.”

Mixing history and tradition with the present is a theme that can be found throughout the cottage. The river porch ceilings were painted the traditional blue, and the Strands decided to bring the outside in by painting the ceilings in the adjoining rooms blue as well for a fresh twist on tradition. “Everything for me is about a mixture of the old and the new,” Anne says. “The mixture keeps things lively, but comfortable and accessible.”

From the inviting front porch to the charming light-filled bedrooms, the two-story cottage is a Southern oasis that seems to gracefully transcend time. The Bridgetender’s House is a home where the river continues to play an integral role. The stunning sunrise and sunset views of the tree-lined river below, as seen from the porch, are what first attracted the Strands to the Bridgetender’s House, and they’ve found that inside the views are just as idyllic. “We can see the constantly changing river from our bedroom through the door to the porch. Each morning a different atmosphere paints the scene,” Anne explains. “And because of its position on the side of the bluff, we joke that the Bridgetender’s House is the perfect place to relax and celebrate in a magical space outside of time.”

Transform Your Breakfast Space with These Inspiring Spots and Fresh Flavors

If You Love Blue and White, Then You Won’t Want to Miss This Home Tour