As she grew older, April started branching out from the local thrift shops and started making antiquing more of an experience, taking trips to visit antiques markets in Nashville, Tennessee, and the famed Scott Antique Markets in Atlanta, Georgia. It was during those trips that she realized a way to turn her passion into a profession. Instead of traveling to the flea market, she thought, why not bring the flea market to her town? Thus began Vintage Pickin’, a now quarterly flea market with dozens of vendors all meeting in a barn on April’s land. What started as a small event has blossomed into a full weekend experience, and this year, the Wilks family took a leap of faith and are holding a market in South Carolina, their first one outside of their home of Fyffe, Alabama.

As you would expect, April’s home is overflowing with vintage pieces. From the antique general store counter used as her kitchen island to the apothecary-style dresser in her living room, every piece has its own story. When she doesn’t buy vintage, she blends her new pieces with the antiques seamlessly, giving the whole home a patina of age that can’t be replicated. “You have to tie pieces in together,” she says. “Not everything has to be vintage.” She encourages friends and shoppers to play with a blend of new and old and see what works together.

Another of April’s unique finds are the doors throughout her home. The 1990s house originally had traditional doors, but over the years, April has switched them out for antique pieces on sliding tracks. “I wanted to display my doors like a piece of art in the home,” she says. Another beloved feature of the doors? They’re space savers. “We installed them in the kids’ bedrooms and the pantry, and they actually gave the rooms more square footage because we don’t have to worry about the door getting in the way.”

When asked how she would define her style, April struggles a little before saying, “I had someone message me one time and say, ‘I can’t exactly define your style. It has so many different elements that there’s not really a word for it, but I love it.’” The statement couldn’t be truer. The Wilks home doesn’t fit neatly into the farmhouse or bohemian or
traditional styles; April made her own.

To see more homes like April’s, check out our special vintage issue below! 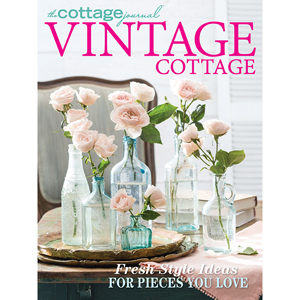 This California Cottage Served as a Clean Slate for Fresh Style

Make Your Cottage Merry and Bright with These Market Finds