Flowering cabbages and kales are a wonderful starting point, and they perform long after the first frost strikes. Couple them with ornamental grasses that send their plumes jutting up late in the season (fountain grass, or Pennisetum setaceum ‘Rubrum’, with burgundy leaves topped by peachy plumes is her personal favorite). From that starting gate, she began profiling late-season perennials such as Russian sage (Perovskia atriplicifolia), purple coneflower (Echinacea purpurea, which now comes in a variety of hues), rare asters, hardy chrysanthemums, Shasta daisies, and black-eyed Susans (Rudbeckia cultivars).

“To extend the season, continue deadheading as flowers fade. Your plants will get another burst of energy,” she says. In addition, she offers annual performers to perk up fall. After a little experimentation, she discovered that petunias, pansies, violas, zinnias (especially the ‘Profusion’ series), lantanas, and gomphrenas can be coaxed to launch another spurt of flowers if pruned back in late summer. Verbena bonariensis hits its zenith at the tail end of the growing season, sending up spires crowned in purple flowers, while Mexican sunflowers (Tithonia rotundifolia) brandish radiant orange and yellow blooms.

Play your cards right, and autumn can be magnificent. “Sometimes I think autumn is my favorite season,” Sarah says, beaming. “Couple that glowing afternoon light with the scent of wood smoke wafting on the chilly air and it’s the stuff of dreams.” Autumn is just one more reason why Sarah has taken farming to the next generation, putting her own spin on traditions that run in the family. And yes, the customers eagerly crowd in. Proud of her land-based legacy and building on a strong past, for The Farmer’s Daughter, pumpkins were just a starting point.

Like what you see? Shop the issue by clicking below! 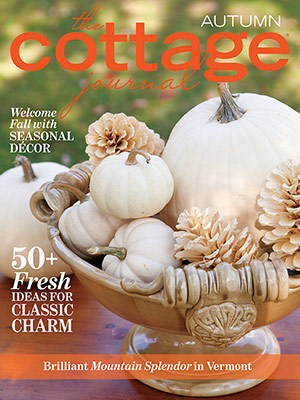 From the Experts: How to Make Your Flowers Last Longer

Nantucket Looms Is an East Coast Staple for a Reason