A kitchen renovation was on Morgan Murphy’s long list of things to do upon purchasing a home in the neighborhood where he grew up. But when rats fell out of the ceiling along with 10,000 or so acorns, the renovation quickly moved to number one. “The kitchen looked like the museum of natural history, but nasty,” says Morgan. Painted bright blue with 1970s appliances, he proclaimed he wanted to take the room back to its original 1930s style.

Everything in the kitchen had to be replaced, including the ceiling joists, but Morgan didn’t want to change the room’s dimensions. “This house doesn’t lend itself to an eat-in open concept,” he says referring to today’s popular kitchen designs. He admires the entertaining style of the 1930s, when guests remained in the dining or living room while the cook was cooking. “Besides,” he says, “I don’t want people watching me cook. I’m a food critic not a gourmet chef.” The room is not large, but it has the perfect work triangle and, he adds, it’s easy and quick to clean.

Morgan spent three months researching books on cottage kitchens, as well as looking at old house plans and photos of his actual home at the tax assessor’s office. He even went along with a realtor friend to see other houses built during that period and eventually came up with what he considered the keys to a 1930s kitchen.

Heavy use of tile, usually white. He used black-and-white tiles for the backsplash and floor and loves the fact they wear great, even with kids and dogs in the house. Countertops were practical, not decorative. And on either side of the stove he laid tile that could withstand hot pots. In other sections, he added a marble countertop for baking and a butcher’s block for chopping.

He opted for no upper cabinets. Instead, as a storage alternative, Morgan hung brass bars to hold utensils as well as his collection of copper pots and pans.

Windows on two sides of the room allowed for ample light and fresh air. He added stained glass windows across one wall and above the sink for an added dose of personality. When creating his stained glass, Morgan incorporated a bit of whimsy to the designs. A discerning eye will spot a knife, fork, and spoon in the windows by the table. The stained glass in his grade school dining hall in England inspired the windows above the sink, but the Latin phrases inscribed are not odes to reason and truth, instead translating to sayings: “Kiss the Cook,” “If you can’t stand the heat get out of the kitchen,” and “Hunger is our favorite recipe.”

The kitchen boasts a working rotary-dial phone from the Chicago Old Telephone Company. “Everybody wants to use it,” Morgan says, “but children come over and don’t know how to work the buttons.”

As much as Morgan loves the kitchen’s details, the Chambers oven is his pride and joy. He found this special 1953 copper edition online and got it fully restored. The Chambers, first made in 1912 and known for retaining heat, was a cook’s Cadillac, top of the line luxury. According to Morgan, it has an oven large enough to cook a 20-pound turkey. The range comes with its own built-in slow cooker, a griddle, and a grill. It’s easy to take apart, clean, and put back together. To create a sense of a hearth, Morgan ran tile above the oven to the ceiling, leaving a built-in, open arched shelf for spices and condiments. A wooden shelf resembling a mantel hangs above the shelf.

“The nicest compliment I get is when asked if the kitchen is original to the house,” says Morgan. He admits he doesn’t like going through a house and being able to date when it was done, so that’s why he designed the kitchen to reflect the style of the 1930s, when this house was built. “I’ve lived with the kitchen for 10 years now and have never tired of it,” he says. It seems doubtful he ever will.

Shop the issue below for more autumn inspiration! 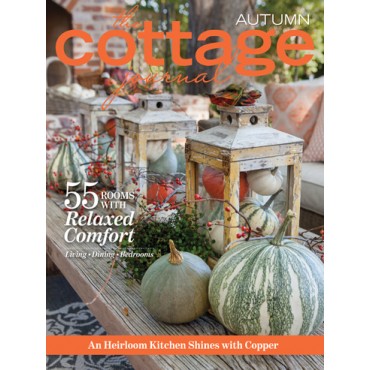 Warm Up This Winter with a Cozy Fireside Respite